What’s new in the world of watchmaking? Here are all the new luxury watches and updates for this month.

In watchmaking, January 2022 was dominated by LVMH Watch Week, with collectors enthralled by ethereal creations from Hublot and Zenith. This year could have a whiff of serendipity as icons such as the Royal Oak celebrate major milestones. More on that below along with this selection of new luxury watches hitting the market.

Among Asia’s Largest and Most Reputable Retailers, Cortina Watch Celebrates 50and birthday this year. To celebrate its golden jubilee, Cortina will present several special editions throughout the year with long-standing partners such as Patek Philippe, Chopard, Corum, Franck Muller, H. Moser & Cie., TAG Heuer and Blancpain. The first watch of the celebratory occasion was unveiled in February 2022.

The creation loaded with symbolism is the Patek Philippe Ref. 5057G-010, a new interpretation of Ref. 5057R-001 created for Cortina Watch in 1997 to celebrate the retailer’s 25th anniversary. Limited to 100 pieces, the commemorative coin is adorned with the triple guilloché bezel, also present on the 25th anniversary coin. Studious collectors will be aware that a typical Calatrava such as the Ref. 6119 only comes with two rows of nails. In addition, the sapphire case back is subtly inscribed “Cortina Watch 50th Anniversary Since 1972”. 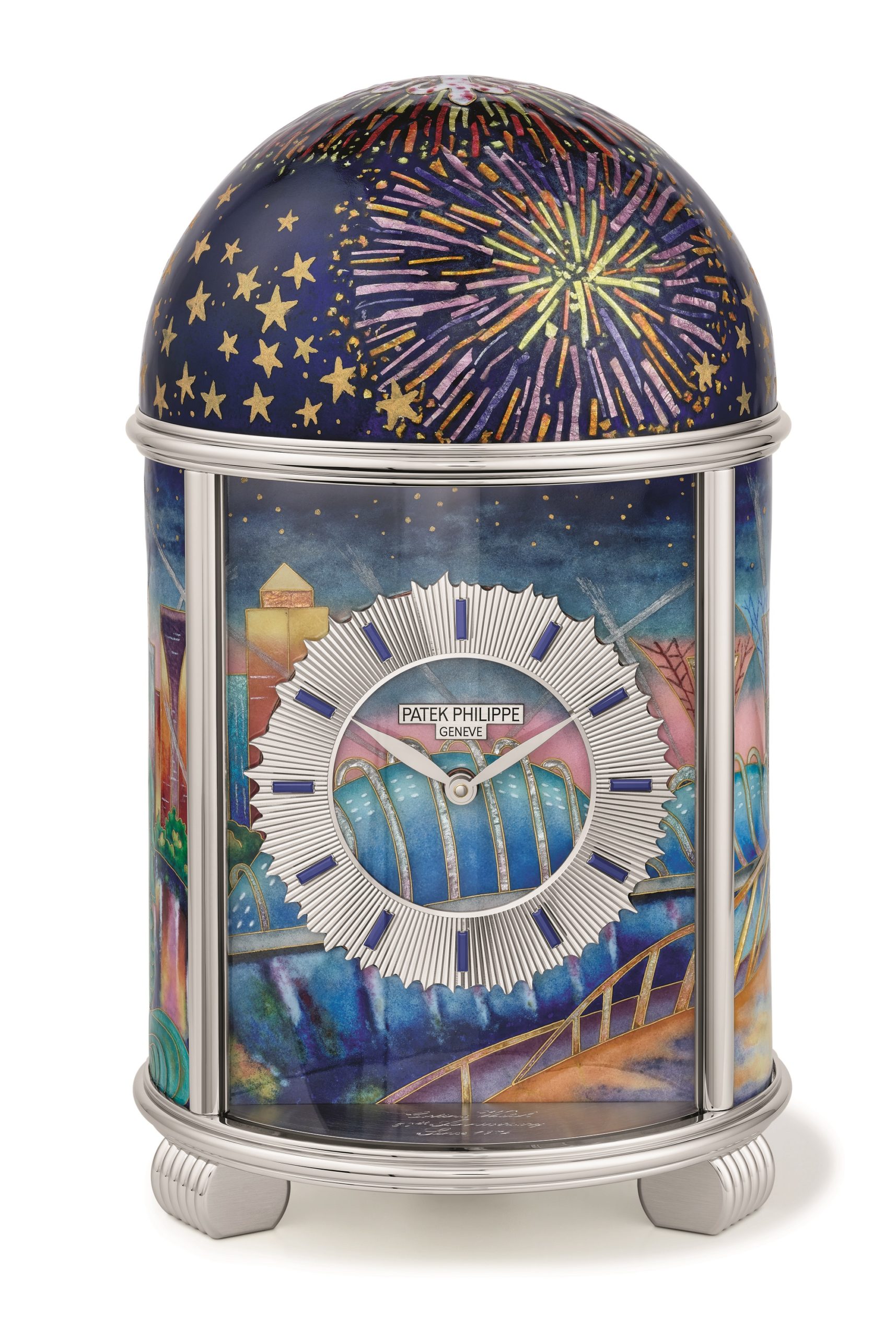 But that’s not all. When Patek Philippe hosted the groundbreaking Watch Art Grand Exhibition in Singapore, guests were left disarmed by the ethereal assemblage of colorful domed table clocks. To celebrate the cordial relationship with Cortina, Patek Philippe presents the Ref. 20145M-001 “Singapore Skyline”, with Grand Feu cloisonné enamel reflecting Singapore’s cityscape, such as the Merlion and Gardens by the Bay. 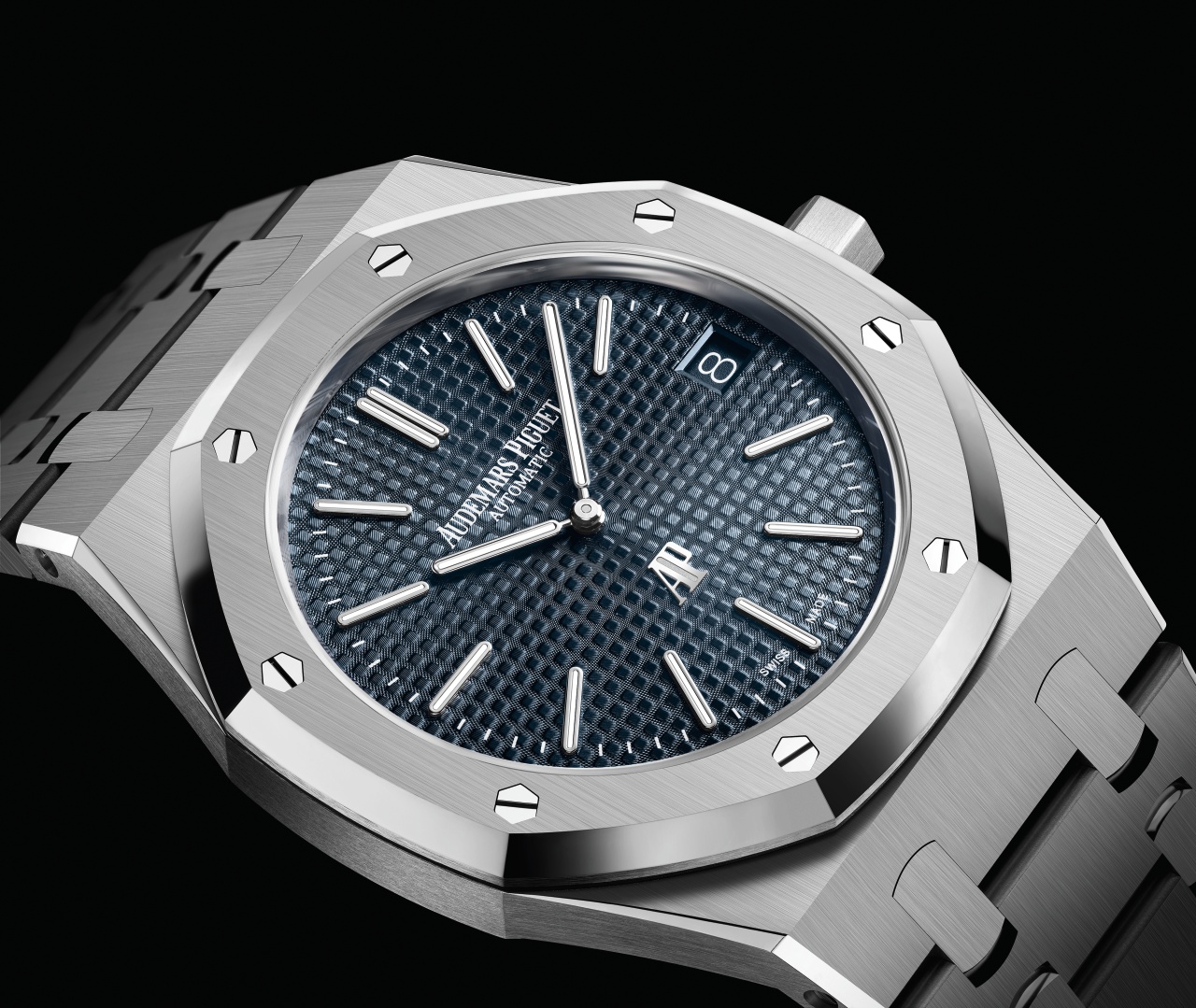 Iconic is a phrase often misused to elevate an ordinary product or to endow a mundane item with a barely-deserved superlative. But if there is one watch that categorically deserves the right to be called an icon, it is the Royal Oak. Its revered aesthetic revolving around the octagonal bezel and integrated bracelet divided opinion when the watch debuted half a century ago, but in the decades since the watch has become highly sought after and spawned many numerous interpretations ranging from the Tapiserrie dial to the scalloping with a miniature sculpture of a Marvel superhero, to merge the frosted finish.

For the 50and anniversary of the Royal Oak, Audemars Piguet revisits the most identifiable version and gives it an appropriate facelift. Beyond simply introducing new 37mm self-winding hour, minute, second and date models, as well as new 38mm and 41mm self-winding chronographs, is the evolution design. How much can you modify something that is close to perfect? Plenty apparently – but only if you know where to look. 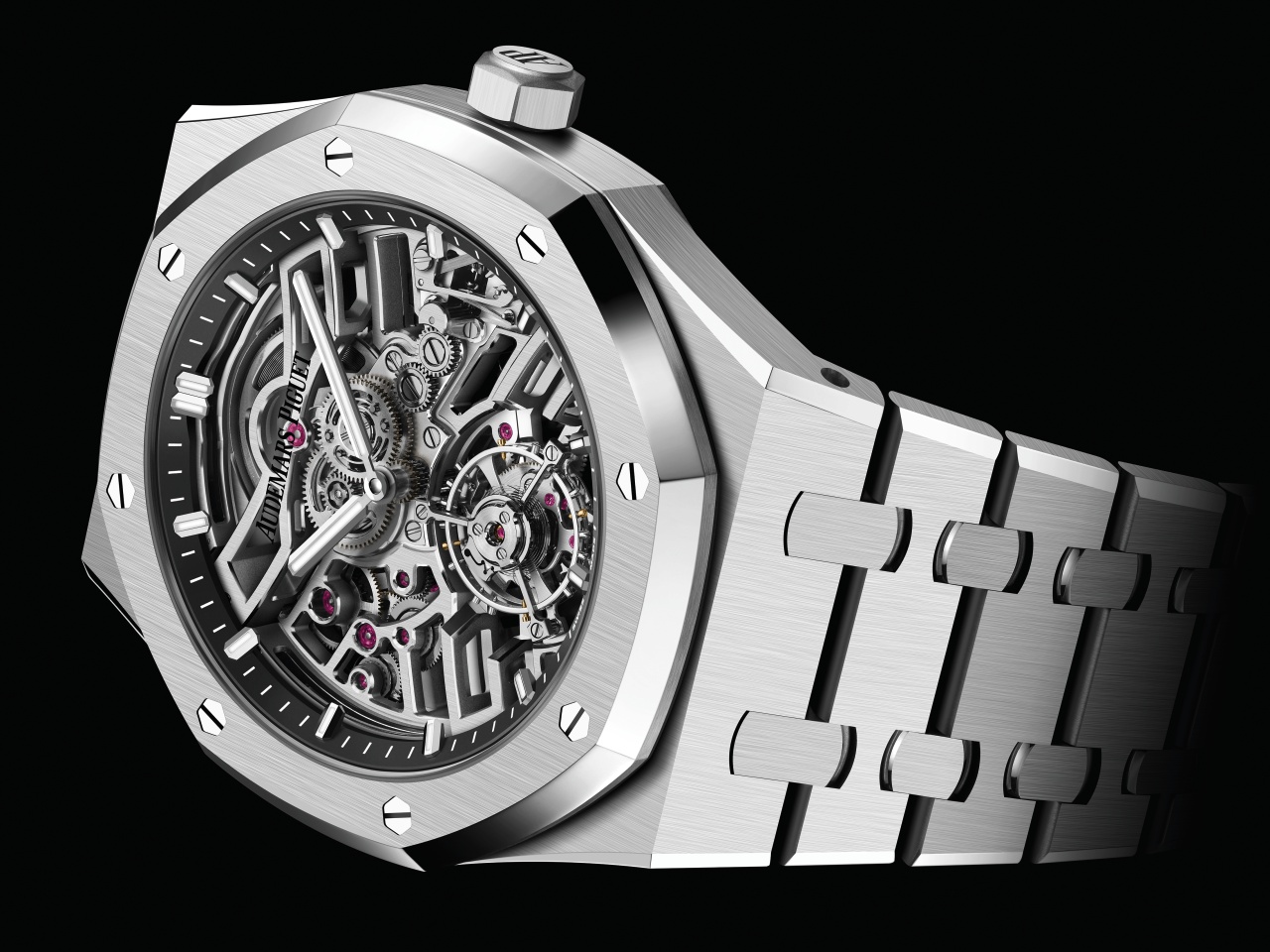 For example, the latest 39mm Royal Oak “Jumbo” Extra-Thin (Ref. 16202) is now powered by the new Caliber 7121 extra-thin self-winding in-house movement. This is accompanied by an improved power reserve at 55 hours. The rotor also takes on added significance as it displays a 50-year commemorative oscillating weight. In fact, the special rotor is reserved for other Royal Oak editions released this year, even when a different self-winding movement might be used. Subtle changes have also been made to the staging of the case, bracelet and dial.

I am particularly seduced by the premiere of the Royal Oak Selfwinding Flying Tourbillon Openworked. The 41mm stainless steel piece beats the brand’s first-ever openworked self-winding flying tourbillon mechanism in the shape of the caliber 2972. Anyone with a love for skeleton watches would appreciate this prospect. 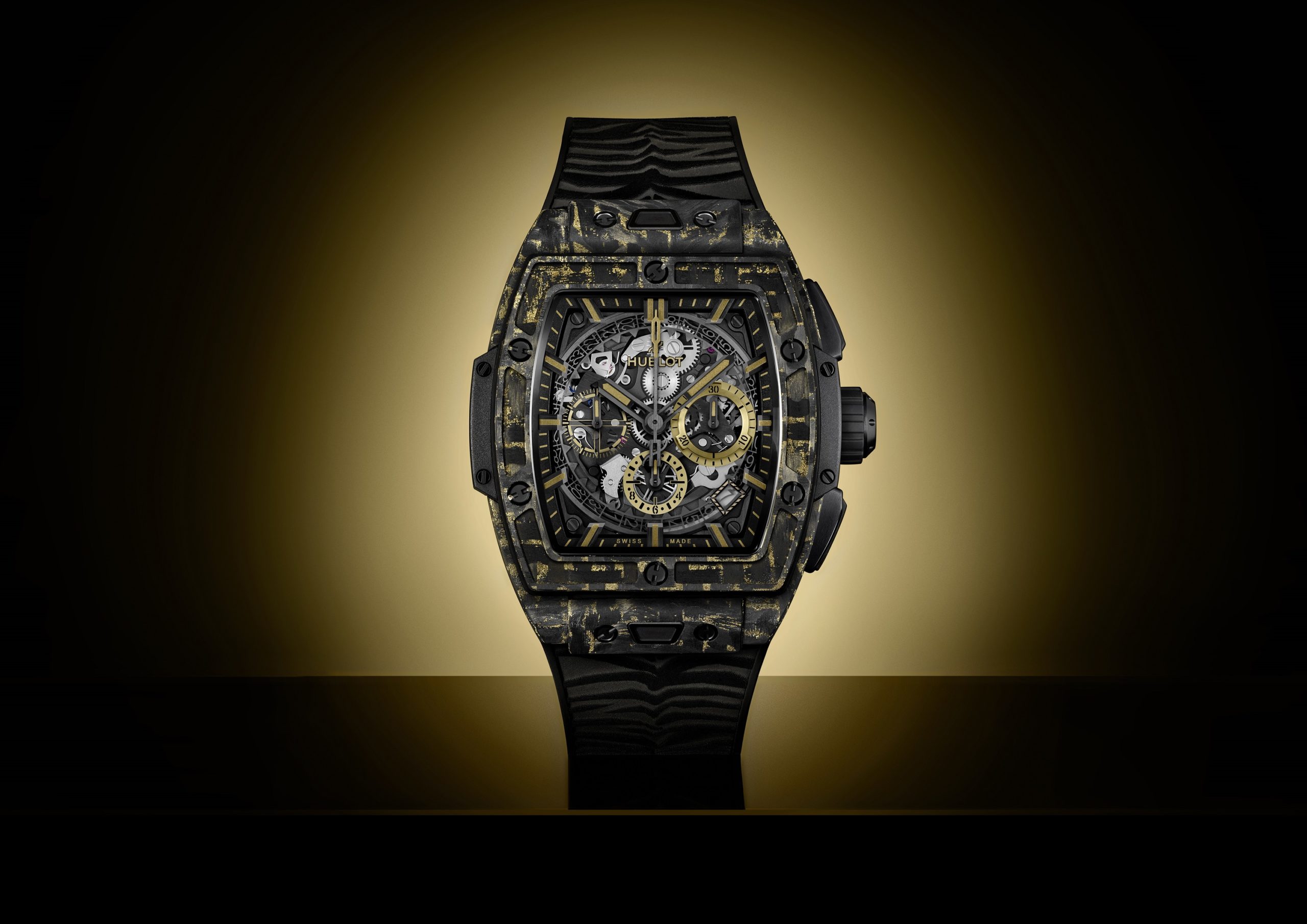 In honor of the Year of the Tiger, Hublot presents the Spirit of Big Bang Carbon Gold Tiger, a tonneau-shaped watch whose case is sheathed in Frosted Carbon and 18-carat yellow gold. Developed by Hublot, the composite teems with scintillating streaks in the middle of an ebony core reminiscent of the majestic tiger stripe. At its core is a skeletonized Hublot movement derived from the high-frequency El Primero caliber that paved the way for modern Swiss-made chronographs, but enhanced with contemporary components such as a silicon regulator. Limited to 200 pieces worldwide, the chevron-patterned black rubber strap features Hublot’s patented One-Click system, allowing the owner to easily swap it out for a supplied yellow gold Velcro fabric strap.

Building on the brand’s ambitious lifestyle offerings, Breitling unveils a new watch in the form of the Top Time Triumph to mark the partnership with the motorcycle manufacturer amid the latter’s 120th anniversary. The Top Time collection through the ages has always exuded a sense of freshness and the new creation is no different. The “Zorro” dial here is done in a more unison approach instead of the usual two-tone. The blue color is a reference to the blue Triumph Thunderbird 6T from 1951 and a rare Breitling Top Time Ref. 815 from the 1970s. At 41 mm, the chronograph is unisex. 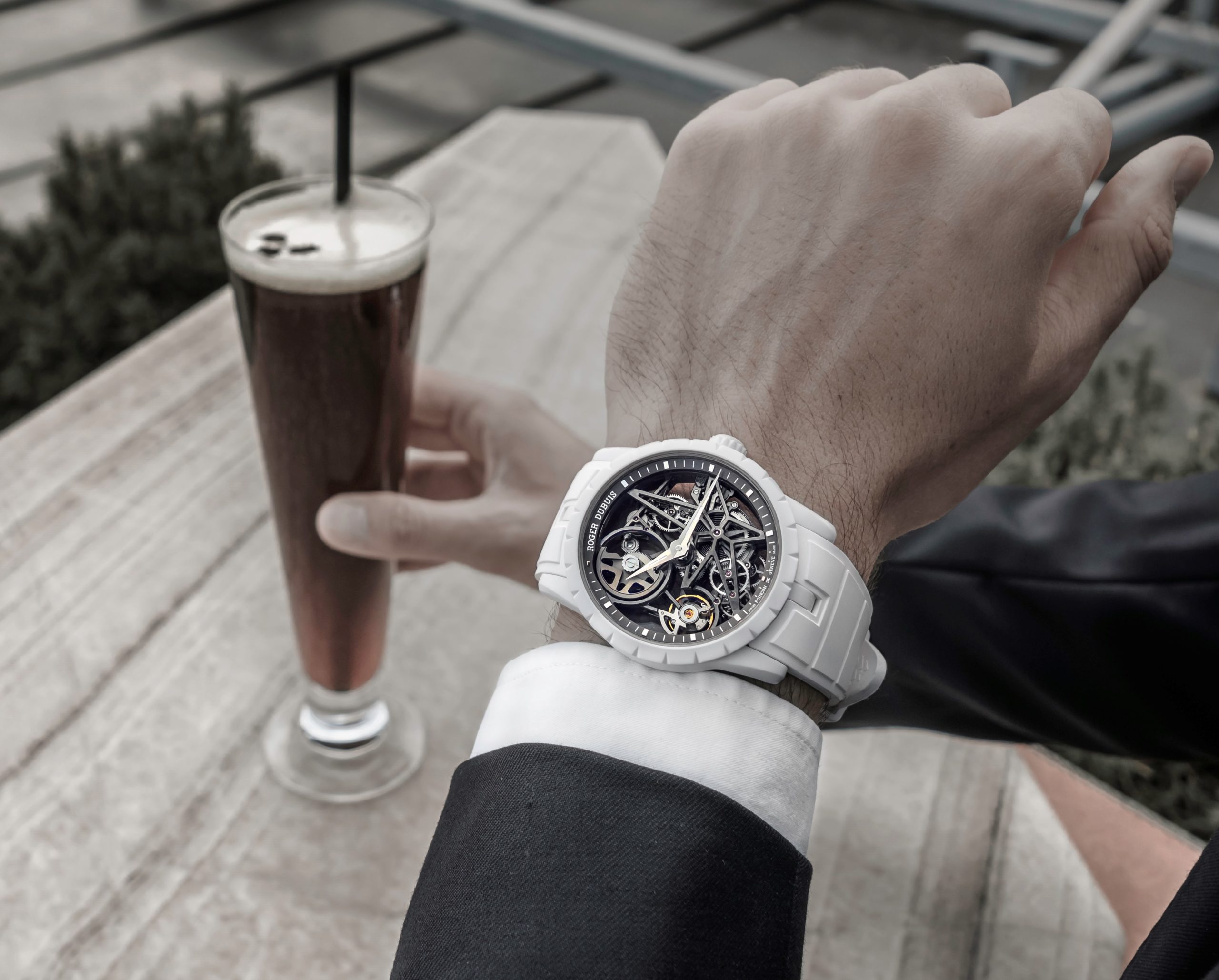 Roger Dubuis once again draws on the avant-garde for the Excalibur Monobalancier. An immaculate looking skeleton watch, the 42mm case is crafted from Mineral Composite Fiber (MCF), engineered from 99.95% silica and manufactured using a Sheet Molding Compound (SMC) process.

At 2.5 times lighter than ceramic and 13% lighter than SMC carbon, the advanced material allows the brand to push the boundaries a little further in watch creation. Its unique properties of high resistance to UV, artificial and natural light guarantee the watch a remarkable whiteness, unaffected by the elements and time.

The RD820SQ caliber with a 60-hour power reserve is adorned with brand signatures such as a micro-rotor and a skeletonized star bridge that is as well finished as it is robust. The watch is produced in 88 pieces. 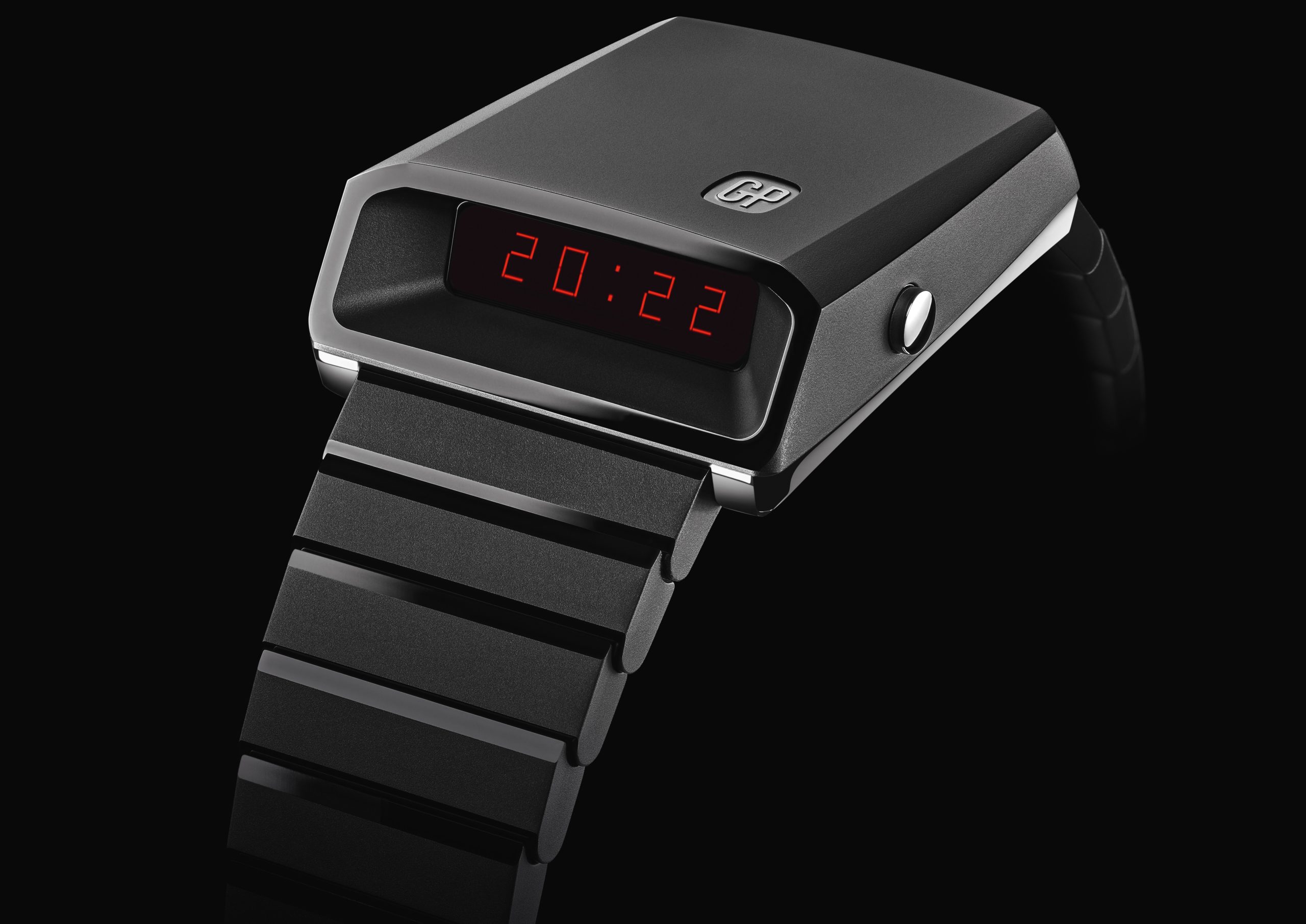 A sign of the times and of progress as we have gone through vinyl, cassettes, CDs, minidiscs, MP3s, streaming… and now the resurrection of vinyl. Similarly, Girard-Perregaux is dusting off its archives to release the unusual Cap 2.0. The principle of the watch is not haute horlogerie but irreverence. It’s a watch described as iconoclastic and we love it. The original Cap was produced in 8,200 pieces throughout its tenure, while the 2.0 comes in 820 pieces. You don’t have to worry about its longevity. Enveloped in ceramic and grade 5 titanium, and powered by a modern quartz movement, this watch is made to last. 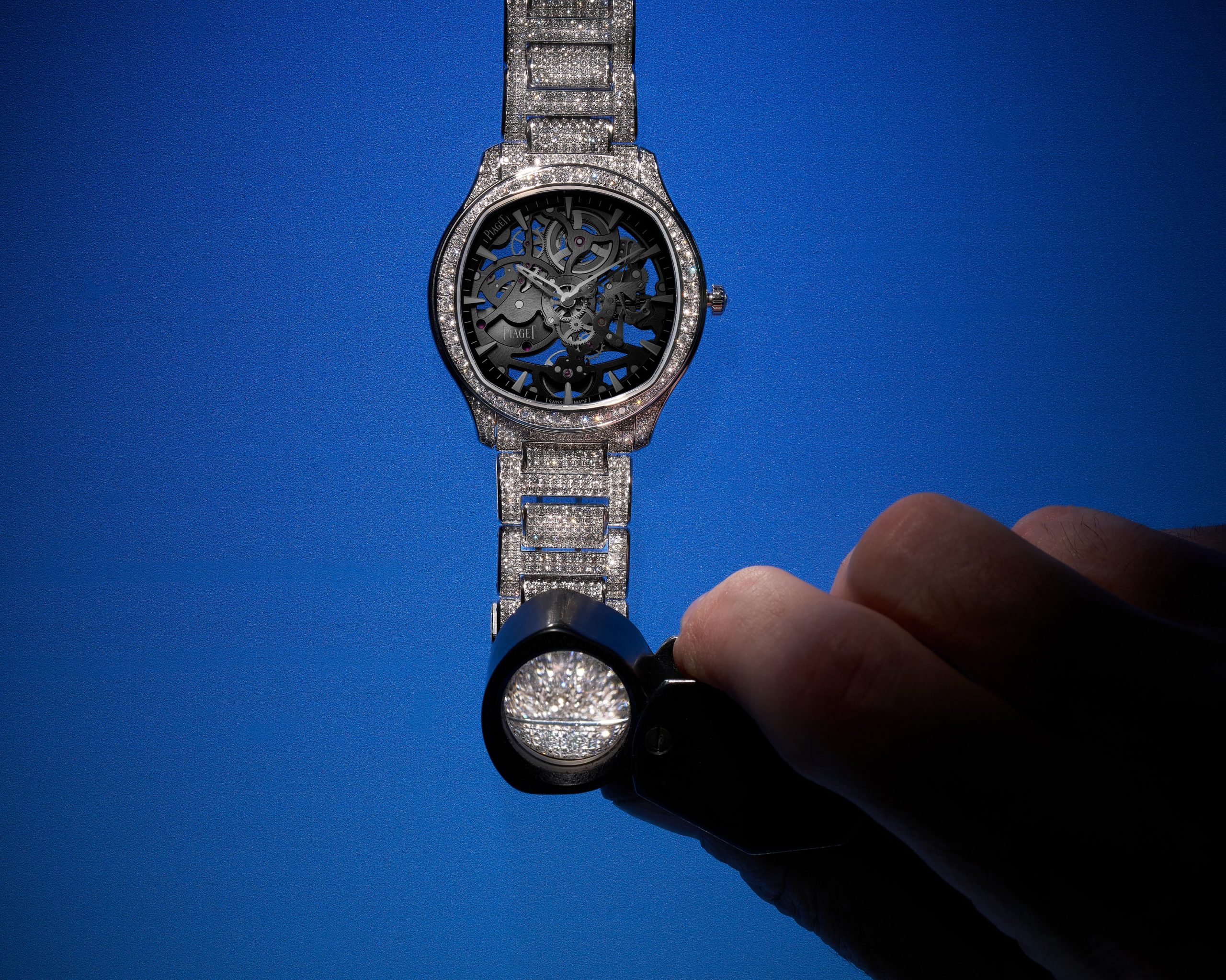 As Watches & Wonders 2022 runs from March 30 to April 5, Piaget is stealing the show by launching two new luxury watches in the form of the Polo Skeleton and the Limelight Gala Aventurine. A showcase of the house’s gem-setting expertise, the Polo Skeleton is generously paved with diamonds, totaling 1,746 brilliant-cut stones that are impossible to take your eyes off, while the Limelight Gala Aventurine set with 62 diamonds features a bewitching dial reminiscent of the midnight sky illuminated only by a constellation of twinkling stars. 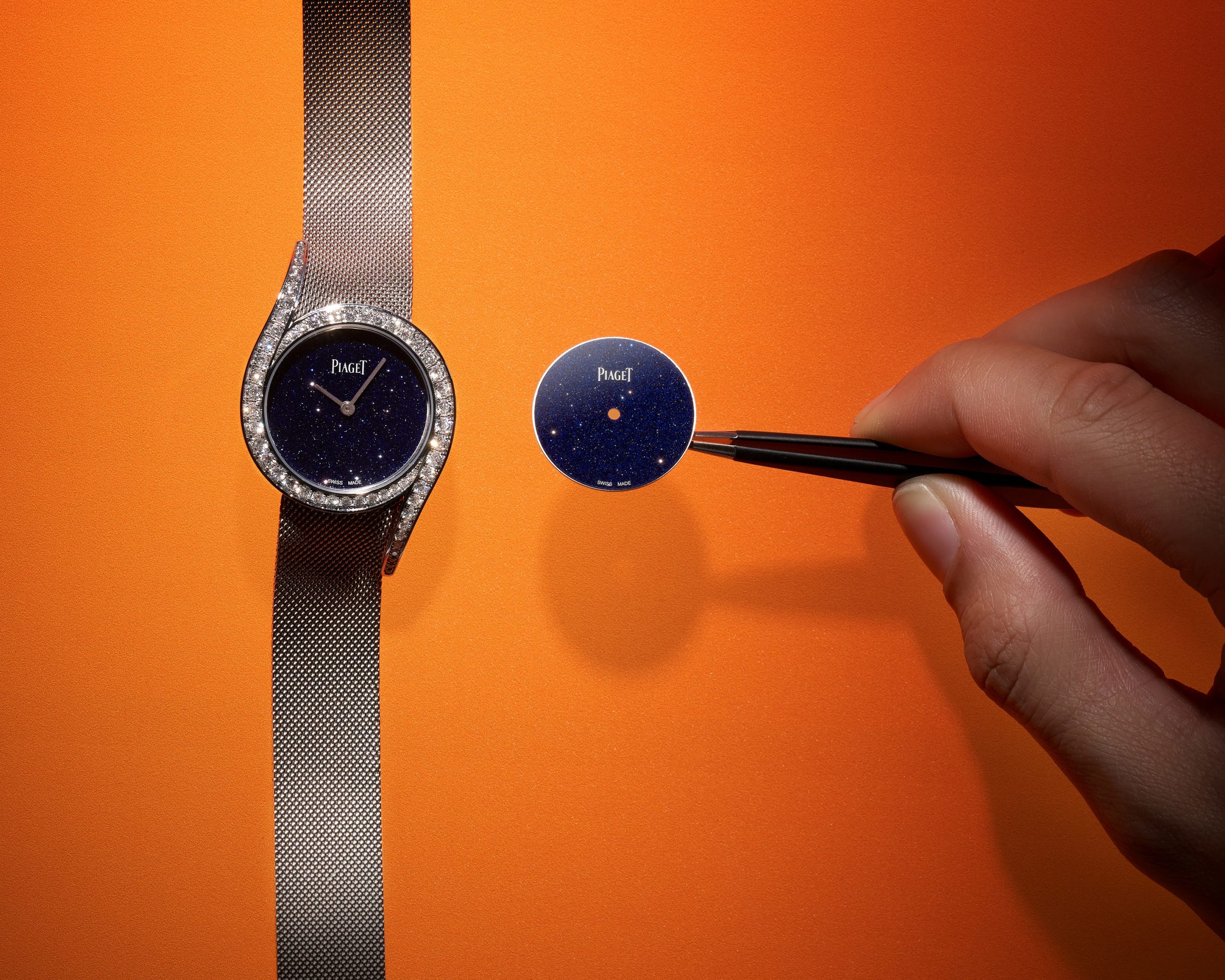 The Milanese mesh bracelet of the latter consumes more than 100 hours of know-how while 366 spirals composed of gold threads are woven to perfection. The Limelight Gala Aventurine is produced in 300 pieces, while the Polo Skeleton being a high jewelry watch is usually limited by demand. 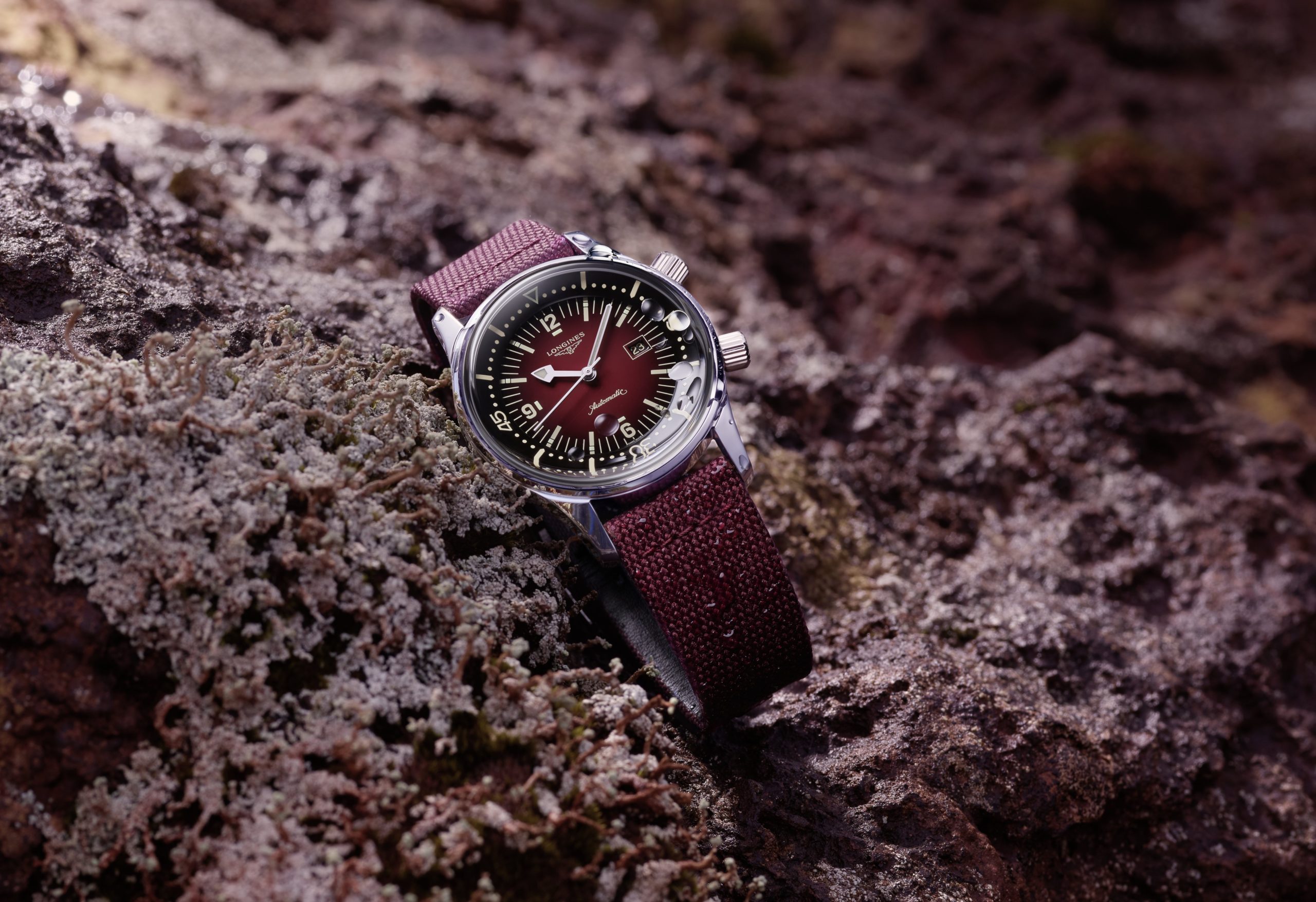 The popular Legend Diver collection is joined by several new watches this month – this time in vibrant burgundy, sand beige, ash gray and royal blue. Since its launch in 2007, heralding a renewed appreciation for vintage-style diver’s watches, the collection has been expanded time and time again.

However, the new designs might prove to be the most alluring yet, thanks to the regal palette. The compressor aesthetic and the box-shaped sapphire remain the signatures of the watch. The 42mm models come in shaded sand beige or ash gray dials and come with tone-on-tone fabric straps. The new 36 mm references are interpreted in bright burgundy and sand beige with matching fabric straps. The royal blue number is presented with a nice leather strap. 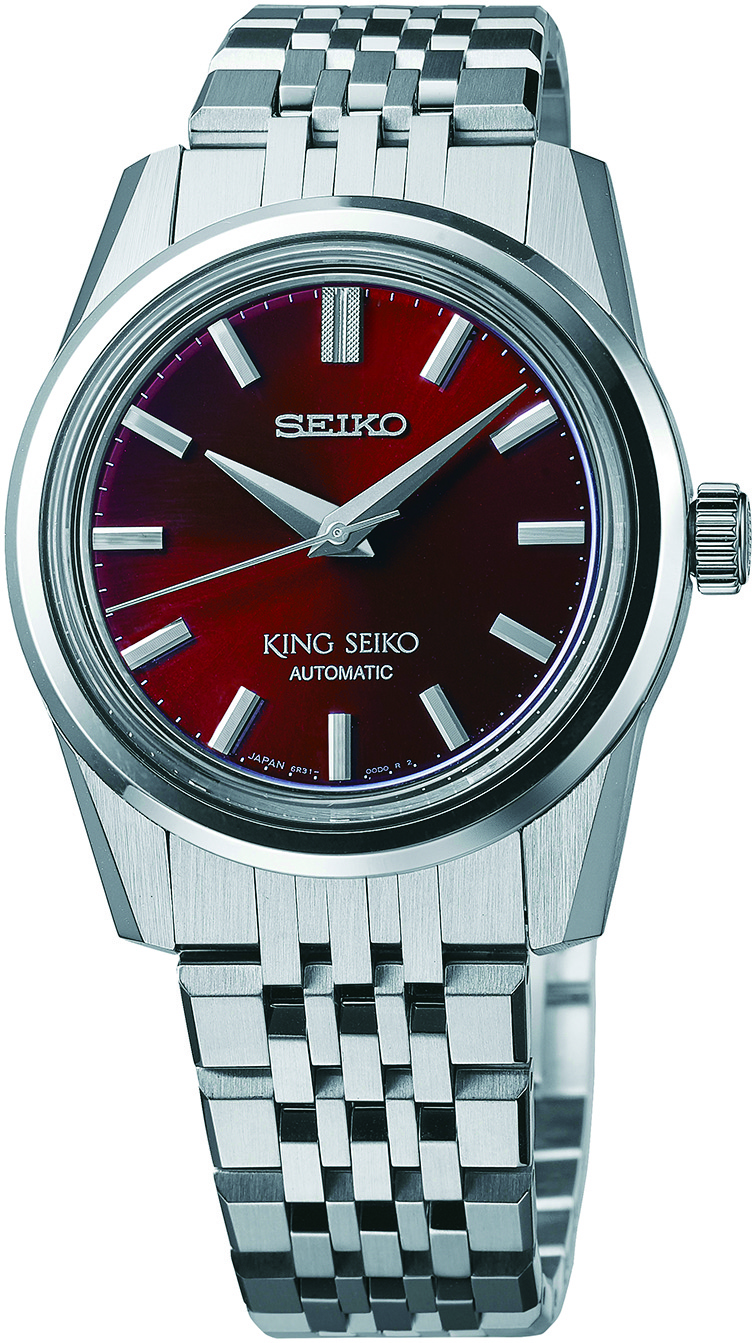 The endearing watch brand from Japan seeks past inspiration for its latest take on King Seiko – a discontinued collection with a cult following. The King Seiko revival has 5 models, all of which share a distinct angular aesthetic inspired by the 1965 King Seiko KSK.

They differ in the colors of the dial – silver, light gray, anthracite gray, brown and red. The influence of the 60s is particularly marked on the robust horn contrasting with a sharp facet. The retro renaissance theme continues on the box-shaped sapphire crystal, while for the strap, a beaded design pays homage to the original King Seiko series.

All images of the respective brands.